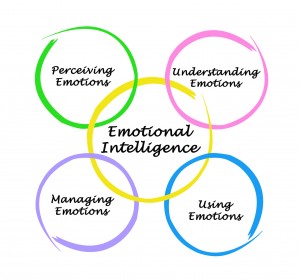 Emotional self-awareness is a learned skill. It’s a skill that involves being able to understand your own emotions and then apply this understanding to outside situations, normally situations that involve people. Instead of lashing out or becoming angry with coworkers, for example, successful leaders have learned how to control their emotions by utilizing effective communication.

The level of communication used to keep a stressful situation under control is a skill that has been detected by the study of neuroscience. Viewing neuroscience as a form of positive psychology is another way understand how these three concepts are related. Leaders who practice positive psychology express themselves in more controlled, calm manners. Instead of allowing themselves to become negative, they have the ability, the learned ability, to take the reins and gain control, thus preventing a potentially explosive situation from becoming an internal riot.

Possessing such skills can make anyone a valuable leader. People who are able to display this level of learned emotional intelligence often find themselves in a position of management. Instead of multi-tasking and ignoring the needs of coworkers, they possess the organizational skills required to effectively make time for their employees. These people have the ability to make others feel equal and heard. They know how to reduce stress and calm employee fears.

When people experience fear, they immediately experience a heightened threat response. This response activates an area of the brain that kick-starts the stress response and in turn, has a large — usually negative — effect on a person’s entire system. However, people with neuroleadership skills have the ability to prevent such circumstances, or at the very least, extinguish emotionally charged situations simply by opening a line of communication.

All of these areas of emotions, brain function and intelligence have been repeatedly found to be interconnected by neuroscience studies. Leaders who understand both neuroscience and emotional intelligence can be an extremely effective and powerful tool for successfully managing engagement.

Author: Divya Parekh (ACC, CPC, LL, MS) is an international career leadership coach, Head Career Coach at International Coach Academy, and CEO of The DP Group. She assists executives, professionals, coaches and students plan, develop and achieve their career and leadership goals. She has been recognized by Worldwide Who’s Who as ‘VIP of the Year’ for showing dedication, leadership and excellence in leadership coaching. She has also been recognized by NAPW as a ‘VIP Woman of the 2014 Year’ for outstanding leadership and commitment in coaching. She is founder of the 1/1/1 Leader Project. The project prides itself on being simple. Set a goal. Work towards achieving it. Give someone a smile. Be nice to another person. Make the world a little bit nicer. It’s free so get started today!