As I neared the lake, my phone rang.  Greta started out the conversation about her week being one of the most stressful weeks in sometime.  She had been involved in several crises and slammed with high priority work in addition to regular workload.  She said that energy drain along with insomnia continued through the week end.  She was unable to wind down this weekend.  She told me that the thought of going back to work on Monday made her feel sick to her stomach.  After several minutes of intense raving, she caught a breath.  She was too restless to do anything about the stress. 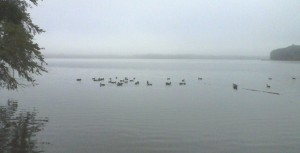 Since I was so wrapped up in listening, I was at a loss for words.  I told her to observe her surroundings until I called her back in few minutes.  I gazed at the vast expanse of the lake looking for answers.  A team of ducks was swimming near the shore. One duck turned its head completely backwards, pushing the beak into the feathers to preen them.  Few seemed to be searching for insect larvae.  Some were making loud displaying calls whereas some quieter contact calls.  The commonality between all of them was that each of the ducks was focused on task at hand.

When I called Greta, I heard laughter in her voice as she informed me that she could not chat presently because her dog had gone crazy by the long awaited attention.  Greta had found a way to relax.  I gave a sigh of relief.

What was it that had changed before and after our conversation?  Greta’s perspective had changed – just by being aware of what was going on right there and then, experiencing her present to the fullest.   Greta’s active and open attention on the present had chased her worries about tomorrow away.

Living in the moment allows one to observe thoughts and feelings as is and generates a calm to deal with life situations.